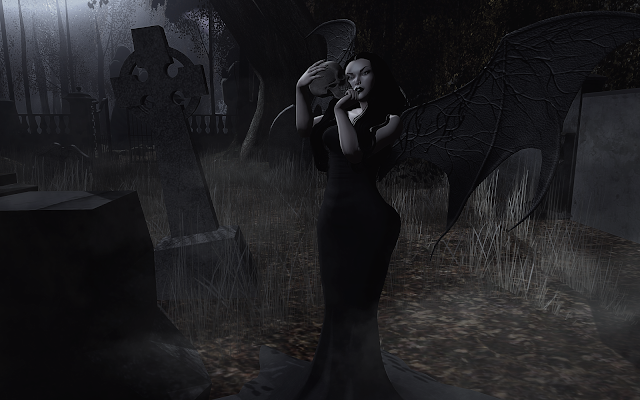 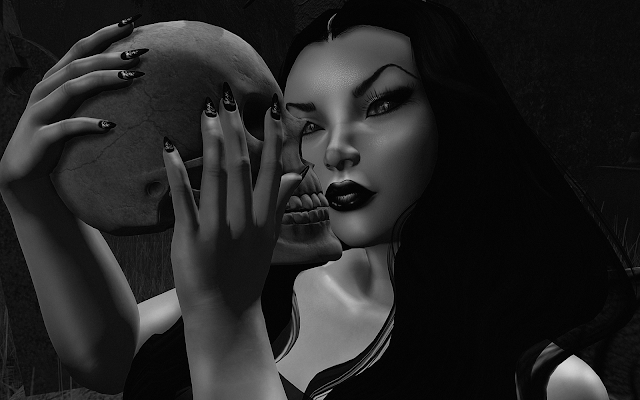 
Hello my lovelies! It's the weekend! Let us rejoice! The long work weeks make the weekend that much sweeter.
So Halloween is officially 8 days away! I swear this month just flies by so fast! If there's ever a time when I can relate just a lil to being bipolar, it's during October. You get that high in the beginning of the month. All the sweet smells of Autumn that start in September are only intensified and it is so intoxicating! As the end of the month comes (so damn quickly!) the high just drops and it is upsetting. We need a pause button in life. Someone get on that!
In other news though!
There's a little event going on in Second Life called 'The Truth About Bats & Avies' brought to you by SL Goth. Several designers from SL have gathered together in an effort to bring awareness of the rapid decline in the bat population, white nose syndrome, and other things threatening their existence. Proceeds from the event will benefit Bat World Sanctuary which is the only accredited bat sanctuary in the world. How I admire that there are people like that in this world. If only I were a rich woman. I bought things from this event with a smile because it's for a great cause and because there's so much awesomeness there. Other designers include: Spellbound, Sn@tch, The Little Bat, Livid, and More! Make sure to check it out!

I couldn't think of a better brand to be there to support the bats than DRBC. In case you haven't had a chance to get up close and personal (woohoo!) with Ms. Dizzy, owner of DRBC, she is an absolute lover of bats! And I don't mean using them as a cute lil print on clothing (although she does that so well too!) I mean she just simply thinks they're adorbs! So it is no surprise to me to see DRBC there with a gorgeous batty dress! The dress is called 'Vampira' and it so reminded me of Vampira.
The quest to look like Vampira in SL I thought would be a simple one but it wasn't. Just so you know SL hair creators...there is no Vampira hair in SL! We (I had Dizzy helping me look for hair lol) scoured SL for hair similar to Vampira's. My requirements were the center part and the hairline and if possible, I wanted the vintage curls at the bottom. Nothing was found. Not.Ever! Spellbound had the closest thing that I wanted. The hairline was there because you're originally supposed to wear barrettes with it. The bottom of my hair is edited in the top pic to curl under. Originally, it hangs a bit straighter.
Dark Passions Koffin Nails is also participating in the event with some adorbs batty nail appliers for Slink, Maitreya and Belleza. I even included a closie for them, I loved them that much <3
Go grab all the thangs! Have a spooktacular weekend! I will see you all again very soon! Make sure to follow Gia's World on Facebook too! I am all over the place. Plurk, Twitter, Flickr